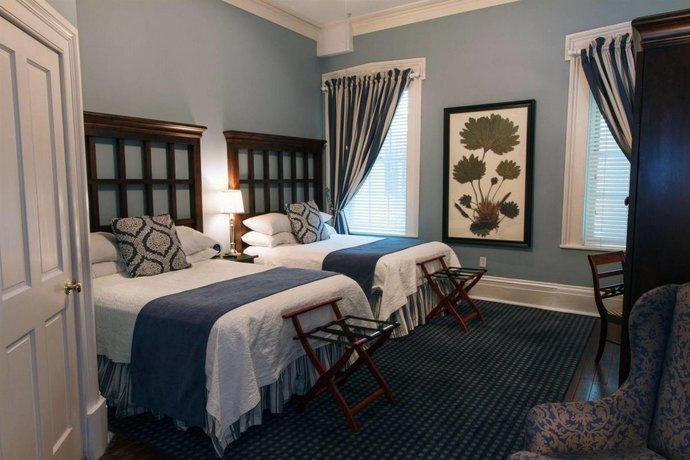 To call The Marshall House the most fascinating hotel in Savannah is an understatement. The property was opened in 1851 by Mary Marshall, a Savannah businesswoman who moved in the most prominent social circles. Ms. Marshall continued at the helm of her namesake property until 1914. During its colorful history, the property was used as a hospital during the yellow fever epidemics in the mid-1800s and as a Union hospital towards the end of the Civil War. Joel Chandler Harris, author with a complicated legacy known for the famous Uncle Remus Stories, once called The Marshall House home.

The hotel closed in 1957 and the second, third, and fourth floors were closed off, while some first floor businesses remained until 1998.

Later, the property underwent a massive renovation and was painstakingly restored and recreated. Highlights include the beautiful brickwork, ornate staircases, wood floors, fireplaces, guest room doors, and many clawfoot bathtubs from the 1880s. The veranda and gas lights were all reproduced and the Atrium was encased in glass to recreate its one-time use as a courtyard. During the restoration process, many historic artifacts were discovered and are now displayed in a small museum on the property. (Don’t miss it!)

Today, The Marshall House is one of the best hotels in Savannah; a title it’s certainly earned. Guest rooms feature seemingly endless luxury appointments and staff treats each guest as if they were a member of Mary Marshall’s elite social circles. As an added bonus, the property is centrally located in the heart of Savannah’s Historic District. Walk to River Street, City Market, and some of the best squares, restaurants, and historic homes in Savannah.

One note: The Marshall House website claims it just might be a haunted hotel. Guests report seeing spirits, hearing children running, having faucets turn on by themselves, and things of that nature. It’s consistently ranked as one of the most haunted hotels in Savannah and the entire U.S., for that matter. So, you may make a new friend or two while you’re there.

Petite Queen: These are the smallest guest rooms, but are big on value.

Classic Queen: Warm and elegant rooms, but slightly larger than the Petite Queen.

Accessible King: Similar to the Classic King rooms, but with accessible options such as the bathroom. Conveniently located on the inside corridor close to the elevators.

Superior King: The most coveted guest rooms. Located on the front of the building with views of Broughton Street.

Broughton Balcony King: The most fun and unique rooms available. Step through large, raised windows onto the beautiful wrought-iron veranda along front of the property. Book early, though, as there are only 6 of these rooms and they fill up fast! Only guests who book the balcony rooms have access to the veranda.

Luxury King Suite: These roomy sanctuaries have a separate sleeping area and parlor for the ultimate in privacy and comfort. Plus, their location on the back of the hotel means plenty of quiet. There are two of these suites available.

The Mary Marshall Suite: The best suite on offer. Ideal for weddings and other special occasions. Provides access to the balcony on the front of the hotel.

Not the right hotel for you?

No worries, we want you to book a truly unique stay while experiencing all that Savannah, GA offers. We have more LAND & NEST Featured Boutique Hotels and Savannah Boutique Hotels for you. Enjoy your trip!

Go Back to Savannah Boutique Hotels

Stay up to date on the best getaway deals, hotel and destination hotspots, and travel tips and trends. We won't sell your email to third parties- you'll get just the best L&N offers and discoveries.